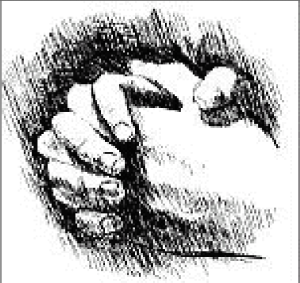 Received this in email today. Too good not to share 🙂

A Minister passing through his church
In the middle of the day,
Decided to pause by the altar
To see who came to pray.

Just then the back door opened,
And a man came down the aisle,
The minister frowned as he saw the man
Hadn’t shaved in a while.

His shirt was torn and shabby,
And his coat was worn and frayed,
The man knelt down and bowed his head,
Then rose and walked away.

In the days that followed at precisely noon,
The preacher saw this chap,
Each time he knelt just for a moment,
A lunch pail in his lap.

Well, the minister’s suspicions grew,
With robbery a main fear,
He decided to stop and ask the man,
‘What are you doing here?’

The old man said he was a factory worker
And lunch was half an hour
Lunchtime was his prayer time,
For finding strength and power.

“I stay only a moment
Because the factory’s far away;
As I kneel here talking to the Lord,
This is kinda what I say:

‘I Just Came By To Tell You, Lord,
How Happy I Have Been,
Since We Found Each Other’s Friendship
And You Took Away My Sin.

Don’t Know Much Of How To Pray,
But I Think About You Every day.
So, Jesus, This Is Ben,
Just Checking In Today.’

The minister feeling foolish,
Told Ben that it was fine.
He told the man that he was welcome
To pray there anytime.

‘It’s time to go, and thanks,’ Ben said
As he hurried to the door.
Then the minister knelt there at the altar,
Which he’d never done before.

His cold heart melted, warmed with love,
As he met with Jesus there.
As the tears flowed down his cheeks,
He repeated old Ben’s prayer:

‘I Just Came By To Tell You, Lord,
How Happy I’ve Been,
Since We Found Each Other’s Friendship
And You Took Away My Sin.

I Don’t Know Much Of How To Pray,
But I Think About You Every day.
So, Jesus, This Is Me,
Just Checking In Today.’

Past noon one day, the minister noticed
That old Ben hadn’t come.
As more days passed and still no Ben,
He began to worry some.

At the factory, he asked about him,
Learning he was ill.
The hospital staff was worried,
But he’d given them a thrill.

The week that Ben was with them,
Brought changes in the ward.
His smiles and joy contagious.
Changed people were his reward.

The head nurse couldn’t understand
Why Ben could be so glad,
When no flowers, calls or cards came,
Not a visitor he had.

The minister stayed by his bed,
He voiced the nurse’s concern:
No friends had come to show they cared.
He had nowhere to turn.

Looking surprised, old Ben spoke up
And with a winsome smile;
‘The nurse is wrong, she couldn’t know,
He’s been here all the while.’

Every day at noon He comes here,
A dear friend of mine, you see,
He sits right down and takes my hand,
Leans over and says to me:

‘I Just Came By To Tell You, Ben,
How Happy I Have Been,
Since We Found This Friendship,
And I Took Away Your Sin.

I Think About You Always
And I Love To Hear You Pray,
And So Ben, This Is Jesus,
Just Checking In Today.’

4 comments on “Checking In”