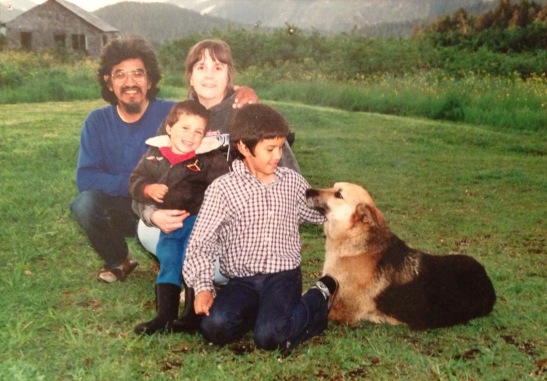 Before my little dog, Rosie, was Weiser (Wiser), a shepherd mix. This pic shows our family when the boys were young yet (they are now 32 and 24) on remote Aktis Island, on the west coast of BC, where my husband Jim was born.

Weiser belonged to a fellow, a neighbour, on the island. This fellow, who was a drinker, said Weiser’s first name was Bud (as in Bud Weiser).

We first met Weiser when we discovered that he was coming to our house and taking things off of our porch to take home to his house. He would grab something he fancied and just take off running as fast as his legs would carry him! We would go walking later and find the item laying at our neighbour’s place.

One day, Jim had his tools out and was doing something in the yard, when Weiser came, brazenly grabbed Jim’s measuring tape and ran off home with it. I have this picture in my head of an outraged Jim standing there yelling at Weiser to come back with it because he needed it!

How Weiser ever came to be ours, I do not recall. How he worked his way into my husband’s affections, I have no clue, but Jim trained him severely out of every bad habit he had and Weiser was MY dog. I loved him, and he was faithful and loyal.

When we had to go to bible school, some years later, we were not allowed to bring a pet, so Weiser had to stay home in care of another neighbour, for 3 years. It got increasingly harder for him as we came and left again every year, and in that last year, he almost died. The neighbour said he was moping and refused to eat. Poor thing.

When we finally came home to stay, oh my, what a song and dance he gave me as he scolded, whined, wagged his tail and ran in circles in sheer delight. I got the WHOLE story, believe me! That was really hard. We never left Weiser that long ever again.

Weiser stayed with us until he developed some health problems and eventually had to be put down. I held him while he went, and cried my eyes out. My faithful friend. Sadly missed.

A dog is not just an animal. A dog is a true part of a family.