Shopped a little. Got the necessities and a bit extra for our building coffee group.

Came home and had coffee/visited with other residents in our new set up in the Seth Norton Lounge. It’s cozy and inviting with the couches and coffee table which were moved  and placed in front of the fire. 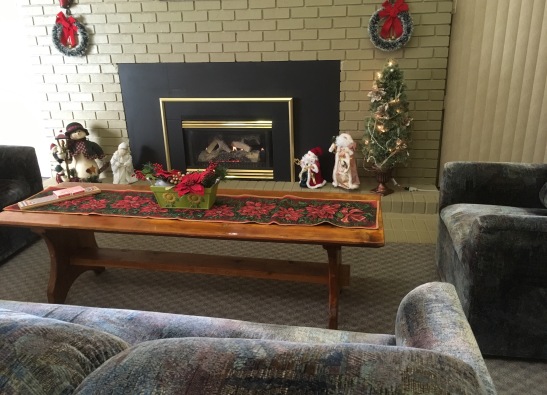 There has been kind of a feud going on in our building which I hope will soon end with management decisions such as this one. It’s very unpleasant to have division in the building, which is basically a small community of its own.

After coffee, I finally settled down to repair a slipper that was falling apart. I have not been able to find a replacement pair yet. I bought them in a store in town here which  no longer exists. The slippers are a fold away ballet slipper, called Sidekicks, which conveniently fold into their own little case, and which proved very sturdy until just recently. I use them mainly for yoga class and for a travel slipper.

I will need another pair still but the repair will do until I can find them. I saw some online, at amazon.ca, but the shipping cost as much as, if not more than, the slipper. I may have to “bite the bullet” to get what I want!

I decided to watch Netflix. Almost fell asleep (well, dozed off several times and had to rewind to see what I missed). Haha!

A friend called and we had a nice visit at Timmy’s together. I had missed him over the last few days, so it was an unexpected surprise! It TOTALLY made my day ❤

This entry was posted on December 3, 2016 by annj49 in Blog and tagged friends, journal, Tim Horton's.