My Jim.
I met him when I was up in Kyuquot, on my first public school teaching assignment in Canada, in the early 1970’s. I remember that day.
I had gone to Doug’s Hardware, which was the place to get everything you might need, including your mail and groceries, in our small community. He was sitting on the ground, outside the store, cross legged, with his hair down to his waist, held in place with a headband that said “Red Power”. He had this wonderful smile on his face as he looked up at me, a newbie in his town.
I looked back at him and smiled, then went on my way into the store, thinking to myself, “What a nice smile! Too bad he’s such a hippy!” And that was our first encounter.

I bumped into him again in Tahsis, when I went for a teacher meeting of some sort and found that I was intrigued by him and of course, beguiled by that smile. I saw him on other occasions here and there, but we did not get to know each other, because I became involved with someone else.
I say, to be humorous, though there is a certain ring of truth to it, that I fell in love with him 10 years later when he cut his hair. He did, and I did.
I’m not going to go into all the details here and now. Suffice to say, we got to know each other and got married, a practically confirmed bachelor and a women’s lib lady.
I remember when we went to get a suit for Jim for the wedding. The guy in the store in Campbell River took Jim’s measurements and got REALLY excited! He called the other store attendants, a couple of young girls and said “You have to see this! You won’t run into these kinds of measurements often! This is a true MOUNTAIN MAN”
And there he was, measuring gleefully and showing off my husband to be, and everyone in sight ogling him, and oohing and aahing! I can imaging the video clip it would have been on Facebook, if that had existed in 1981!
Well, we got married on Aktis Island, in our neighbour’s lovely yard. It was simple and precious. My Mom came over from Scotland to attend. She said of James, “About time. Someone who can control our Annie”. I think about that sometimes 😉

My Mom and Jim’s Mom, Emily, got on like a house on fire, though I can’t imagine they understood much of what the other was saying! Emily spoke mainly her own First Nations language and my Mom was Scottish. Nonetheless, they could be seen laughing together and apparently enjoying each other no end.

So, Jim and I began our married life together. It was not easy. The first seven years were tough. I think we were both hard on each other. We almost separated. However, God is the one who worked to change our lives, mine first and Jimmy’s later. We had both been far from God, and now we took a road together with Him in mind.

It was a long adventure and well worth it. We had our hard times, our fun, our laughter, our love. We were husband and wife. We were brother and sister in the Lord. We shared our faith. We were bible school students at the same time. We were missionaries together. 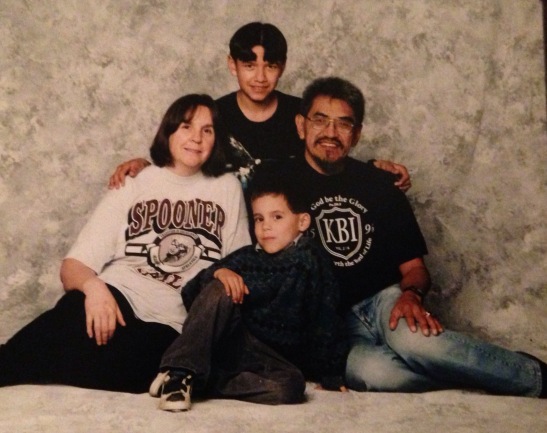 When Jim passed from this life, after knowing him for 25 years, I lost my brother, my colleague, my husband, my lover and my dear friend all at once. It was very tough.

This entry was posted on July 18, 2015 by annj49 in Blog and tagged coping with loss, grief and loss, joy in memories, losing a spouse, lost loved ones.