When I was interested in buying a new vehicle, I went to a dealership my niece recommended. The fellow and I had a conversation around what I was looking for. He knew that the vehicle had to travel miles of rough logging road. He said he’d let me know what he found in my price range.

When he called me, I was a little hesitant, but he really wanted to show me this truck. I was thinking big, mean monster, but said, “No, this will be perfect for you,” and he showed me this truck.

I fell in love at first sight. It’s so easy to drive and park it’s small and cute, and, best of all, RED!

The only problem I have with this truck is when I park in a lot amongst regular trucks and it is dwarfed so badly that I can’t find it! I have often come out of a store and wondered where my truck is, because, for the life of me, I just can’t spot it. Did someone steal it? Was it towed away? Where did it go? Then I find it hiding, nestled between a couple of those monster trucks, like a little baby between its parents.

My nephew bought me a flag and put it in the window, so that now I just look for the flag. It really helps. I just scan the area for a Canucks flag and there it is!

I was coming out of the hospital today, and with my usual propensity for forgetting where I had parked, was troubled by not being able to spot my truck. I know it should be right there somewhere, but WHERE? As I got closer, it became clear, and yes, there was my Canucks flag! Yay! Found again! 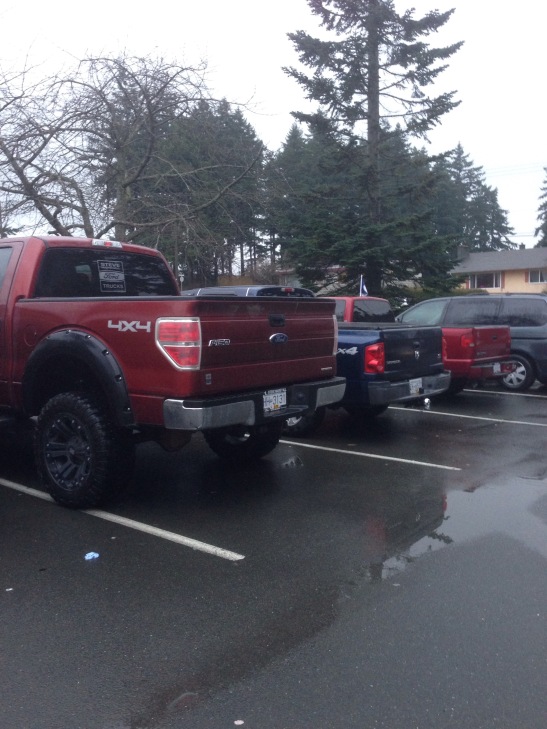 I’ve included in this story a very short video of my truck after a trip on the dirty logging roads. It’s an accidentally awesome clip with an interesting twist! It’s called “Split Truck”

3 comments on “My Little Red Truck”

This entry was posted on February 13, 2015 by annj49 in Blog and tagged Canucks, truck.